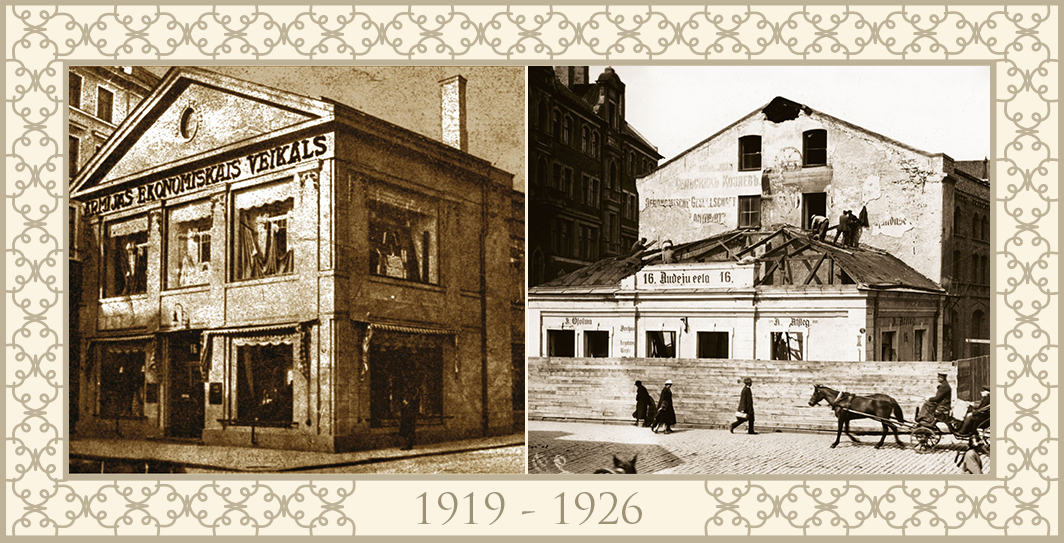 The oldest name of GALERIJA CENTRS is the Army Economy Store. It was founded in the autumn of 1919 and in 1926 was transferred to the building in Riga, Audeju Street 16, which was known as the “Princeses Spikeris” (Princess Warehouse). 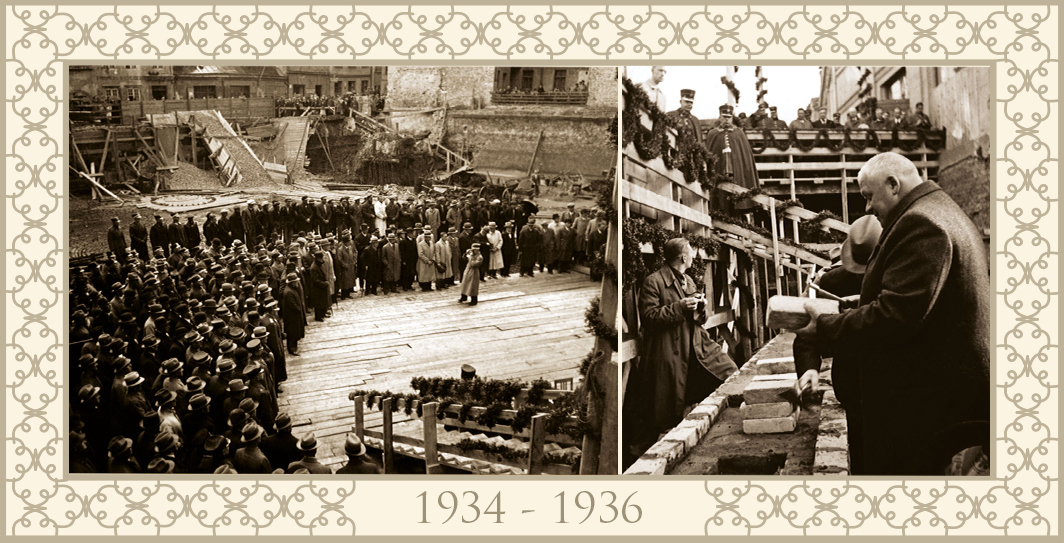 Construction work of the building lasted two years, and in 1938 the new Army Economy Store premises were ready to welcome visitors. In the picture, the President and Prime Minister of Latvia Karlis Ulmanis together with the principal architect of the building Arturs Galindoms try the first escalator in Latvia during the opening celebration.

Interior of the Army Economy Store is designed by Karlis Pluksne, the architect who is known as creator and co-creator of several prominent architectural projects in pre-war Latvia. Among his projects are the Artists’ House in the Old Town and Communard Park, today known as the Esplanade, as well as several monuments and sculptural ensembles. 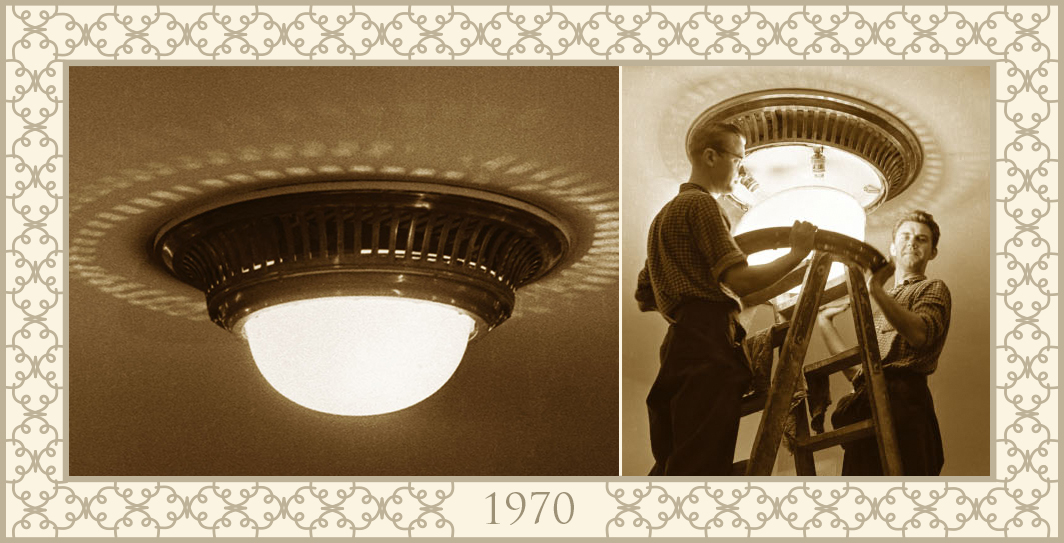 Cleaning of the lighting plafonds after repairs in the lingerie section. Nowadays one can see the original lighting fittings at the historic stairway part of the GALERIJA CENTRS. 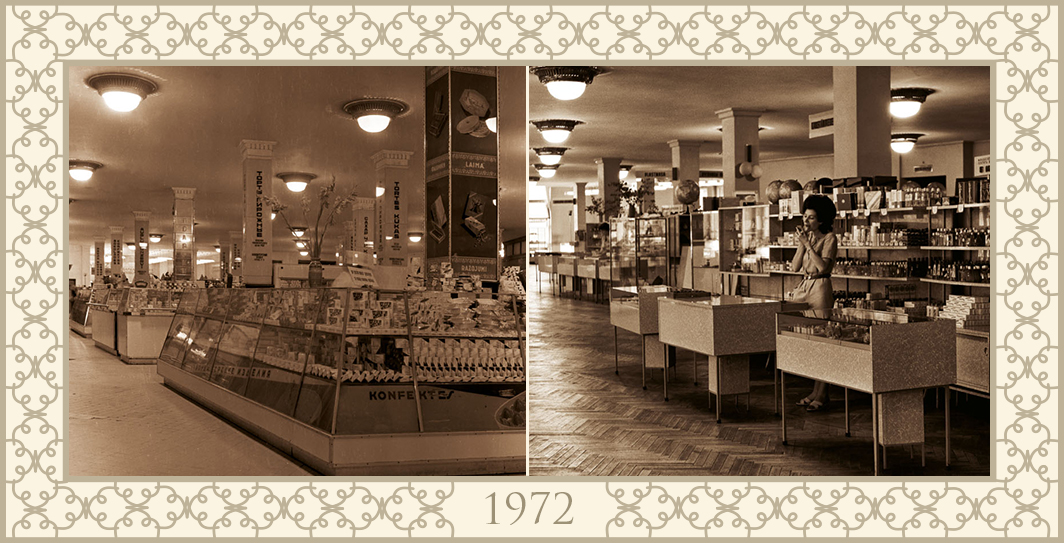 After an extensive reconstruction in 1972 the premises of the Riga Central Department Store were adapted to prevailing interior trends and aesthetic principles of Soviet Union trading houses at the time — form robustness, functionality and easy goods visibility. 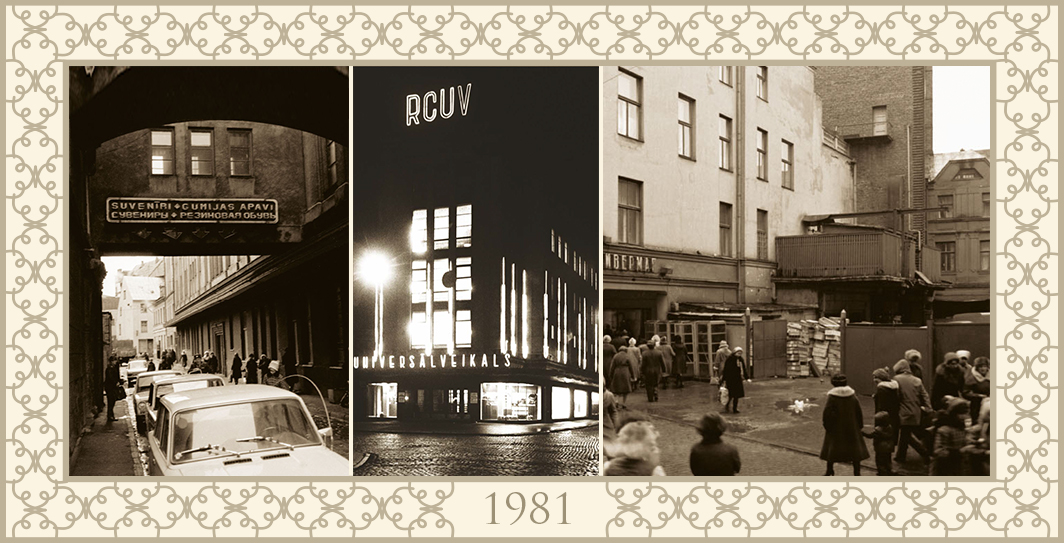 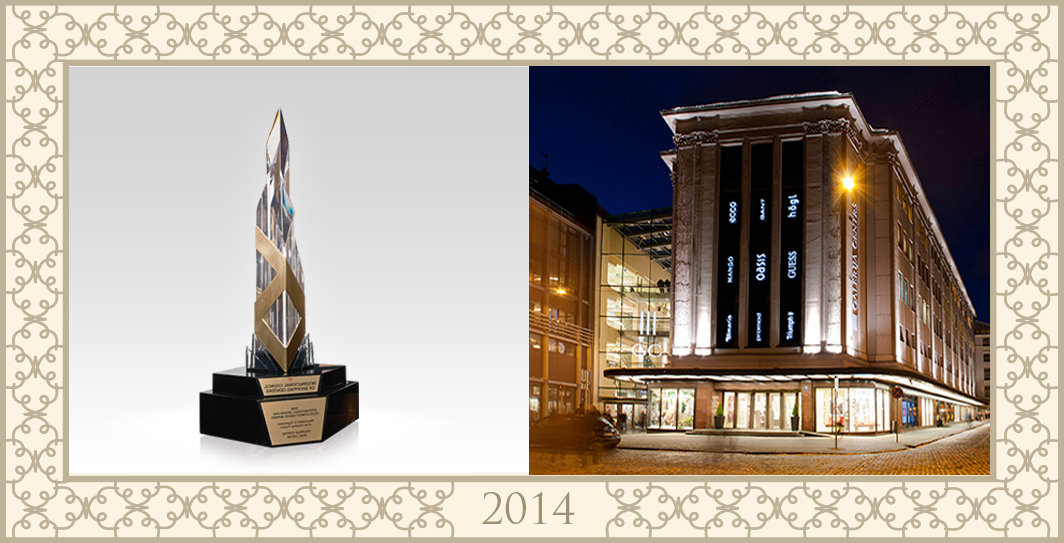 The GALERIJA CENTRS building is of historical significance, and it is several times internationally recognised as an outstanding design object and one of the most successful shopping centres in Europe, including the International Council of Shopping Centers (ICSC) award for the best design project in the world in the “Renovation and Expansion of an Existing Project” category in 2008.

The Old Town holds centuries of history. Since the time when Riga was one of the most active Hanseatic trading points, Old Town has been an enticing selling and buying ‘mecca’ for many both Rigans and visitors. In the Art Nouveau gem, Riga’s fashion and sophisticated lifestyle has long been esteemed. It is difficult to imagine the Old Town without elegance conferred to it by the shopping mall, GALERIJA CENTRS, which opened in 1938.

One can get acquainted with the broader presentation of the GALERIJA CENTRS history right in the shopping mall — in the photo exhibition dedicated especially to the GALERIJA CENTRS history, which is on display in the historic stairway. The exhibition is devoted to the creation history and development of GALERIJA CENTRS starting from the Army Economy Store and longstanding department store “Centrs” until today. It is praised by both Latvian history and culture experts and state officials — Minister of Culture Zaneta Jaunzeme-Grende, Minister of Economy Daniels Pavluts and Head of the “Riga 2014” Foundation Diana Civle.

Within four floors of the mall one can see 63 significant photo fixations from the 73 years long history of GALERIJA CENTRS that so far were hidden in the personal and national archives. The exhibition features photos starting from the foundation stone laying attended by the President and Prime Minister of Latvia Karlis Ulmanis and the store architect Arturs Galindoms until today. Allowing to trace GALERIJA CENTRS development through the decades.